After becoming frustrated trying to access the 1940 Census Images yesterday, I got up at 3:30 AM Pacific Time this morning, in an attempt to beat the East coast rush. It paid off, or at least that's what I tell myself. It's probably more likely that the servers at Archives.com were upgraded to accommodate the enormous amount of interest that this census has generated. So was I pleased with what I found?? You Betcha!

I've only searched a dozen or so Enumeration districts so far. Since I came from a very small town, I've already found most of my immediate family. But what I'm also noticing is how familiar the other local names are, compared to what I've seen on the earlier censuses. Although I am young enough that I won't be included in the next census release, I do recognize many, many names. Several of my older siblings friends are listed. Also listed are many of the people I did business with when I was a young wife and mother. The realtor that sold us our first house shows up. The couple who ran the little grocery where I bought bologna for my mother (and pretzels for me). My banker, and his mother! Several of my co-workers from my first job are listed. How could I have forgotten those names until seeing them on the census? Dozens of the patients I treated as a new Respiratory Therapist at our local hospital are there as well.

I always heard that some people have been missed on censuses, and some have been counted twice. I was never able to find my mother-in-law on the 1930 census, but there she is on the 1940 census, not once, but twice!

After a wonderful day of searching, I will probably put this to rest until the indexes come out. Meanwhile I'll pop on over to FamilySearch.org and help them with the enormous task of indexing every name in the Census. Don't forget, anyone can help. Just follow this link to get started. FamilySearch.org Indexing It's easy, it's fun and it helps others find their family members.
Posted by Arlene at 4/03/2012 08:35:00 PM No comments:

I've been eagerly awaiting the release today of the 1940 US Census images. The information to be posted should help me fill in some gaps in the family tree. However, it's almost 8PM and I haven't yet seen a single image from my home state of Massachusetts. I've been trying all day, different browsers, different websites, even resetting my router. No luck! The servers at the National Archives are overwhelmed by the interest in the images. Ancestry.com and FamilySearch.org have posted some of the images on their sites, but nothing yet from Massachusetts or New Hampshire, the states I am most interested in.

The day wasn't a total waste though. I spent some time indexing the Delaware images for FamilySearch.org this evening. And this afternoon, I did some long postponed ironing!
Posted by Arlene at 4/02/2012 08:45:00 PM No comments:

Why is Gilbert Baker on the front page of this? 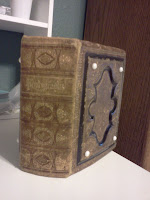 I've had this album in my possession for over 20 years, but I've never been able to put the puzzle together. The first photo in this album is labelled Gilbert Baker, father of Sarah Barrett. The second photo is labelled George N Frothingham (my grandfather) and the third is Samuel Foster Frothingham, who could be either my great-grandfather or his uncle. For years, I've searched Ancestry.com for a clue to who Gilbert Baker might be. This week, I've been spending more time on FamilySearch.org after my daughter-in-law mentioned it at lunch on Saturday. They have indexed a huge amount of images lately and I was finally able to find some clues.

First, I found Sarah Baker's marriage to James Barrett. Her parents were Gilbert Baker and Sarah. That looked promising. She was 20 years old at the marriage in 1874, so now I had an approximate birth date. Some more searching found Sarah Baker, born 1854, father Gilbert S Baker, and mother Sarah who was born in Nova Scotia.

A little more research found Gilbert S Baker's marriage to Sarah McIntire in 1851. Sarah's father was listed as Edward McIntire. However, I also found a death record for Sarah which listed her father as John MacIntire and her birth as occurring in Prince Edward Island.

My great-grandfather, Samuel F Frothingham was married to Jane McIntire. Jane was born in Prince Edward Island in 1838. Her death record lists her father as Edward MacIntyre. I can't be positive, but I believe Sarah (McIntire) Baker was either Jane McIntire's sister, or possibly her cousin, depending on which record of her father's name is correct.

For those like me who are eagerly awaiting the release of the 1940 Federal Census, here is a countdown monitor until the big DAY. Add 9 hours to this for the exact TIME the census schedule images will be available on April 2, 2012, at 9:00 AM EDT.

Photo Albums Are Back!

After much frustration and a few curse words all the photo albums are back online. The link from Frothingham.us should bring you to them, but if not, this link will work.

They still need some details fixed. The captions all disappeared when I re-loaded the pictures, and they reverted to the original file names. I'll try to make them prettier soon. For now, they are organized in albums, mostly by family or contributor. The gravestones are in a separate album, grouped by cemetery name and can be found at this link:

I know that Aurore (Poulin) Gilman's mother was Mary Gagnon. I'm trying to make the connection to the Gagnons that I knew when I was growing up in Salisbury MA. I think possibly Mary Gagnon and Louis Gagnon, whose wife was Rosanna, may be brother and sister but the final piece is eluding me. Can anyone help?
Posted by Arlene at 9/29/2011 08:14:00 PM No comments:

I received a message from Matthew Hodgson at my Frothingham.us guestbook. He and I have been corresponding for several years. I recently had a chance to try some of their Frothingham Best beer while in London.  He's wondering if the Frothingham Family in the United States would have enough interest in their beer to start sending some here. I think we should all support him!

Here is his message:

See our link about Frothingham success and the Yorkshire Taste awards here in the UK. If we get lots of interest from the Frothingham family may be one day we will be able in distribute this wonderful beer in the U.S.
See our site www.greatnewsomebrewery.co.uk
Let us know what you think via our Facebook and Twitter Page